Day 30 – Homeward bound via a very very long west coast route, but discovered the most beautiful lake in the world!

Today, we were due to do a lot of travelling. so we got up at a fairly reasonable time, had breakfast and set off back through Wanaka, up to PuzzleWorld and then dived off up SH6. This was to be the start of a long drive up over the Haast Pass and then up the West Coast to have a final “farewell” to the setting sun and the Tasman Sea, at Hokitika before heading back to Christchurch the next day.

With very sad hearts we left Wanaka and started up route SH6. It did not take too long, winding up along the expansive Lake Wanaka to our left, before we hit a pleasure paradise and one totally unexpected.

The most beautiful Lake in the World!!!

It is also a place where freedom camping is allowed. Dam,, so close to where we were as well. Maybe next time, hey?

I don’t know what it was about the lake itself. Whether its setting, the way the mountains folded into the lake itself, the Luppins, the beaches, or the way the road wound its way around the contours of the lake. In any case, as it revealed itself more and more to us, we had to stop many times just to take stock of its pure beauty and accept that we were heading home. 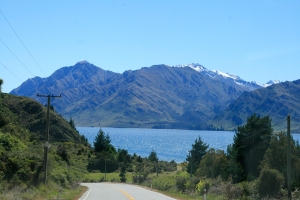 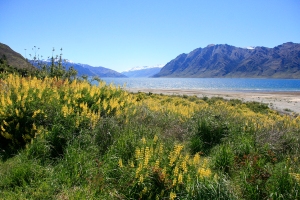 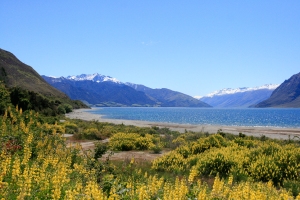 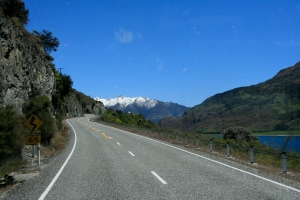 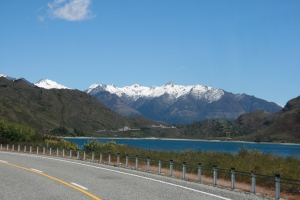 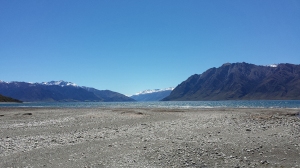 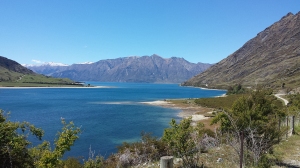 Tears flowed as we so wanted to stay, but knew that family and commitments were waiting for us back at home. If you are still with us from the start of this amazing journey, 30 days ago, you may well associate yourselves with us in that, from time to time, you may also find a place which just sums up your emotions.

It could be a mountain range, a desert heat haze, a lofty spire or azure blue sea. Wherever you find your “soul place”, we found it that day at the banks of Lake Hawea and it was with a very heavy heart that we eventually set off up the Haast Pass, leaving the lake to touch another soul in the future. Enjoy the photos, if you never come into contact with this gem. The space was sublime. We stopped at one place half way up the lake, and proceeded to do a series of photographs showing us jumping along the beach with joy and abandon…. but those are for our own library. Some things are meant to be “special”, this was one of those moments. 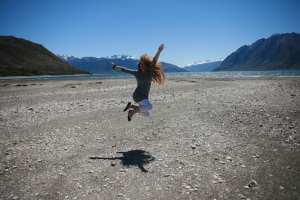 After leaving Lake Hawea, we rejoined the northern end of Lake Wanaka. I did say earlier, that it is a very long lake! 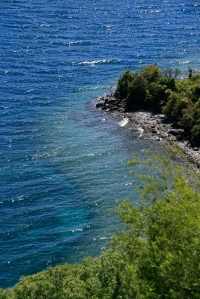 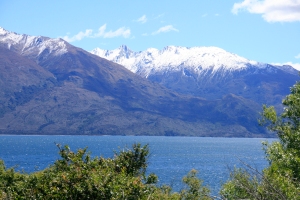 Haast Pass itself was a mass of twisting bends up and up until we reached the summit of the pass and started heading down towards Haast itself.

The route from Lake Hawea to Haast seemed to take for ever and when we eventually arrived at this very strange town, we stopped for a coffee at a truck stop, which was our first mistake. Haast is a very strange, alien town just off the SH6. I must admit, that after the beauty of nature that we had been enjoying, to stumble into Haast, made us wish that the town was called “Haste” instead, because we couldn’t wait to leave it.

And then we hit the Tasman Sea and travelled north up along the coastal route, hugging the steep cliffs down to the pounding waves below to our left.

Now, if the first part of our journey felt long, this second part seemed to last an eternity. The road just seemed to go on and on with little let up or opportunity to stop and by the time we got to Lake Moeraki, with Mitch driving, I was trying to follow the route on the paper map just so I could see that we were actually getting closer to our night stop.

Lake Moeraki gave way to Lake Paringa and on and on and on up through flatlands, dry river beds, some occasional glimpses of the sea to the west until we eventually got to Bruce Bay and a short break.

We noticed that lots of people had written their names on stones and placed them in a long pile, as if, like us, they wanted to say their goodbyes to this amazing place. When you get there, see if you can find us. 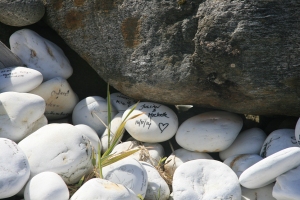 Off again up through the Westland Tai Poutini National Park, which was weird as it looked like the lichen and moss along the road, on the sides of the rock faces, had all been run horizontally by hand. Lovely colours, and of course, as we were now starting to head back to the main West coast mountain range, where Mt. Cook was, we got glimpses of the lofty mountains again, as if they were trying to ease our sadness and boredom on this road.

We did see a face in the mountains. Cool…

We got to the turn off to the Franz Josef Glacier and we dived off to have a quick look. A lot of people rave about it, and I am sure it is amazing when you get closer to it, but perhaps, as we were not “in the right place”, we were not overly impressed.

Whataroa, “The town that everyone has forgotten and even those who live there wish they could forget!” Maybe I am being a bit harsh, but as we turned into the town, we were struck by just how dead and empty it felt. Not a soul to be seen anywhere and it was only about 2pm. No bill boards, no sign of life, no petrol stations, cafes, coffee shops, supermarkets…… If it was advertised on a website, which I am sure there must be some, I would find it a struggle to big it up….

We did not stop! 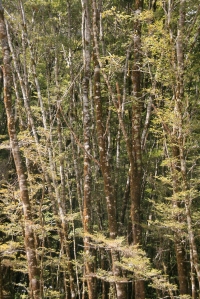 Oh my goodness! Will this road never end? 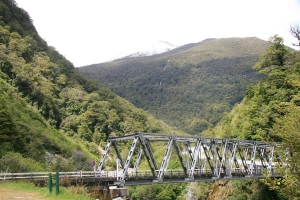 Another 50 minutes of this and we were both ready to be like the Keas and start to chew off the rubber from the windows….. and then we hit Harihari!

If Haast should have been renamed “Haste”, then Harihari should be called “Hurry hurry”… away from here!”

An incredibly long straight road bisects the inhabitants of Harihari. Well, I say “inhabitants” as I assume there are some. But again, we saw no sign of life, no coffee shops, no activity…. Oh no, sorry. My bad, we did!

Posted against practically every house, were these billboards proclaiming, “1080 kills!”

Please shoot me now as this area feels like it should be in a scene from some manic depressive television channel!

But look, what is this? We were getting closer to Hokitika and as this was apparently the “Jade capital of the world”, then surely it would have the gravitas and setting of a truly memorable visitor destination, right?

Seaside town meets Blackpool on steroids, and the missing 100,000 Chinese immigrants who came here looking for freedom, still stuck in their coaches, furiously clicking away at the scenery with their cameras and flash lights.

We had no choice. We stayed overnight here. The sunset was spectacular though, and very sad to say goodbye to it, and, by proxy, to New Zealand as well. It seemed such a shame that the beauty we had seen travelling up here, in the nature and setting, appeared to have been ruined by man’s attempt to place towns and villages with little to no regard to the location. 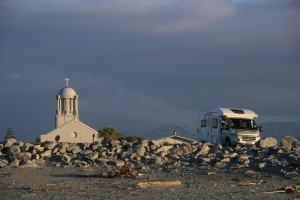 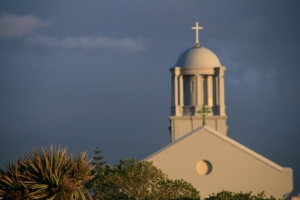 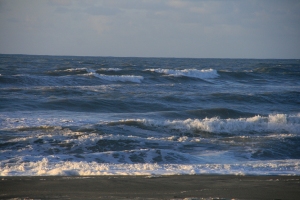 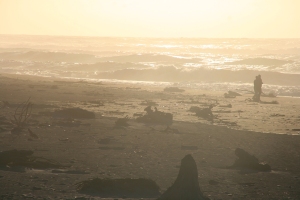 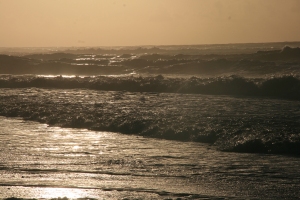 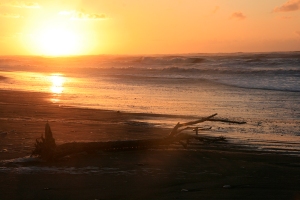 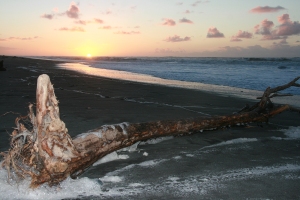 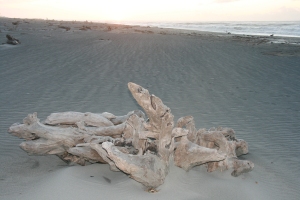 We arrived late and could find no supermarket for produce, so we made do with what was left in the fridge. Not much!

The Top 10 motorhome camp site was next to a dirty, smelly bread factory. Go figure!

We are a couple who are young at heart yet old souls. We felt the need to travel to New Zealand to re-energise our batteries ready for 2015
View all posts by mitchandjulian2014 →
This entry was posted in Uncategorized. Bookmark the permalink.